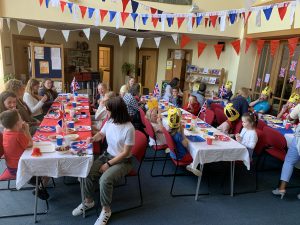 1st Totton had a fabulous tea party with their members and families to celebrate the Jubilee, with bunting they had decorated on display and members sporting some beautifully crafted crowns!

At 20th Nottingham, n:spire member Rebecca received a copy of GB’s Platinum Jubilee card and an Amazon voucher after her entry was one of four chosen winners. She was recognised at the group’s awards evening for her achievement. Naomi from 30th Nottingham won the n:gage category for the card entries and was also presented with hers this term. We hope it will be something they treasure for a long time! 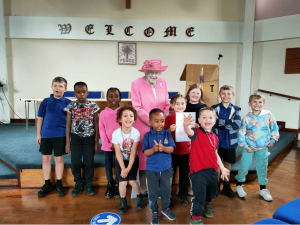 1st South Wigston had photo opportunities with a very special guest at their party evening, although we’ve heard that she wasn’t very chatty! The party was also a lovely opportunity for the group to give awards and badges to all of their members. They gave some final awards and a big farewell to a member of the group who is moving on to Ireland this summer. The member wrote a lovely card for the group. Her message read, ‘Dear Girls’ and Boys’ Brigade. We have had such a wonderful time with you! Thank you very much and please keep making miracles at the church.’

Following her attendance at the Big Afternoon Tea at 10 Downing Street in honour of Her Majesty’s Platinum Jubilee, along with fellow GB member Rebekah, Tilly, from 1st Kendal, got in touch to say how they’d had such a wonderful time and that it was an unforgettable experience.

They were selected to attend because of the impact they’ve made outside of GB. Rebekah, from 2nd Leigh Park, donated her hair to the Little Princess Trust raising more than £800 for the charity, and Tilly raised £180 for a local hospice by knitting little hats and selling them to her friends and family.

On the day, the pair were encouraged to knock on the door at No. 10, they explored the large staircase inside where photos of all of the past prime ministers were hung and had the opportunity to sit with other members of the public who have contributed to their communities, including a world champion kickboxer working to prevent street crime and a 100-year-old lady who still helps at a community cafe!

Tilly says, ‘The food looked so good too! There were sandwiches, mini sausage rolls, coronation chicken, and prawn bites. For pudding, there was the jubilee trifle, cupcakes, mini jaffa cakes, salted caramel bites, and scones. Once we had eaten, we decorated some bunting and played a chocolate coin game. When we left Downing Street there was still lots of press, but we managed to get a few selfies at the door. It was a really good day. Thankyou!’ 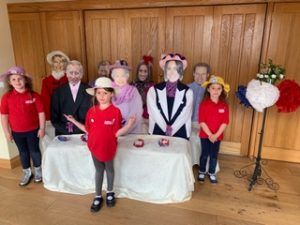 1st Seahouses also had lots of great fun at a tea party to mark the occasion, with the members providing a performance of the National Anthem. It’s lovely to hear that the group has had a big increase in numbers at the group over the past weeks, so what better reason for a celebration?

We also recently learned that a GB leader, Wendy from 1st Hawkwell, played a very important part in this year’s Trooping of the Colour. Wendy hand embroidered the colour that was trooped on the day and, along with members of her GB group, was able to see the colour being used on the big day!