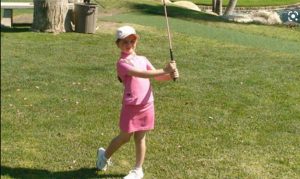 Rachel, aged 16, attends 4th Newcastle upon Tyne community group, along with her mum Emma who is a Leader in the same group.

Rachel shares some of her story below, including how skills learnt at GB have helped her.

‘I started playing golf on my 5th birthday with a set of Barbie golf clubs. I’d seen them in American Golf while shopping for a Father’s Day present for my grandad with my mum and gran. My grandad bought me the clubs for my 5th birthday, and I was instantly attached. I started by going to a cow field at the end of my street with my dad to practice as I was too young to join a golf club then, once winter came, I went to a local driving range. I worked as hard as a 5 year old could over that winter and played in my first competition in the May of that year at Rothbury Golf Club – in a county organised flag day event – which I won. Winning that meant I won a year’s paid membership at any golf club in the county. I chose the golf club closest to my house, Arcot Hall Golf Club, which is still my home club now. I continued to compete over that summer gaining some competitive experience. I also met my coach that summer; Andrew Nicholson who is still my coach now.

‘The next season my dad found a national junior tour called The British Junior Tour. I won my first event which happened to be a qualifier for the Callaway Junior World Championship, which was played in San Diego, California. It was my first experience of representing my country at age 6 and I continued to play those events for a further 4 years which gave me a lot of competitive experience. 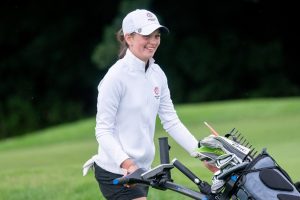 ‘I had my first experience of an elite national event at 10 at the Scottish Girls’ Under 18s Championship. I made the cut which was extremely exciting. In the summers of 2018 and 2019, I helped out with a girls’ beginner programme called Girls Golf Rocks where I assisted the golf professionals at my golf club in teaching beginner girl golfers.

‘In May 2019, I was selected to play my first England match against Spain in a team of 4 girls and 4 boys. I won one of my matches, however England unfortunately lost to Spain. This was a very different experience for me as golf is an individual sport however using some of my teamwork skills I gained through Girls’ Brigade activities I was able to engage and encourage my team.

‘Over the 2019 season, I was selected or qualified for 4 other England matches – versus Switzerland, Scotland, Ireland and Wales. In September 2019 I was asked to join the Elite England Girls’ Squad training sessions on a trial basis and then in January 2020 I was officially announced as a squad member.

‘2020 was a difficult year as we spent time in lockdown unable to play which ultimately taught me a lot about myself and my golf. I learnt skills such as adaptability, resilience and problem solving which I had bases of from Girls’ Brigade activities. The 2020 season was a short one however I won the English under 16s championship and had 3 top fives in other tournaments.

‘Now into the 2021 season, I’m looking forward to hopefully getting some international golf played with the England squad but, most importantly, just getting back to competing.’

You can find out more at https://www.englandgolf.org/a-year-of-opportunity-for-englands-women-and-girls/